Zambian government works with GRID3 and partners to control malaria

In 2016, the World Health Organization (WHO) estimated 3 million people in Zambia had malaria. Within this population, 7% of these cases progressed to severe forms of the disease which, if left untreated, could be fatal especially for children under the age of 5 due to their lack of immunity. In a major effort to protect the Zambian population, the Government of the Republic of Zambia has set the ambitious goal to eliminate malaria by 2021. Currently, the Ministry of Health primarily relies on community-based surveillance and vector control measures. Zambia reached 84% of total coverage in 2018 through either insecticide-treated bed nets (ITN) or indoor residual spraying (IRS) interventions, a malaria intervention method that is preferred for settlements with 25 households or more. However, besides limited funding, the lack of up-to-date population and settlement data poses a constraint to understand the accuracy of reported coverage and to properly plan and execute interventions for nationwide malaria elimination.

Example of a district planning map

“The maps play an important role in visualising villages that are in close proximity to each other and thus need to be sprayed in order to maximise the effects of IRS in protecting an entire community. This is different from the current approach where the distance to the next village is not shown. In addition, smaller more remote settlements have been put on a map for the first time. Some of these may have been missed in previous IRS/ITN interventions,”

details Silvia Renn, a GRID3 expert who worked on the project. 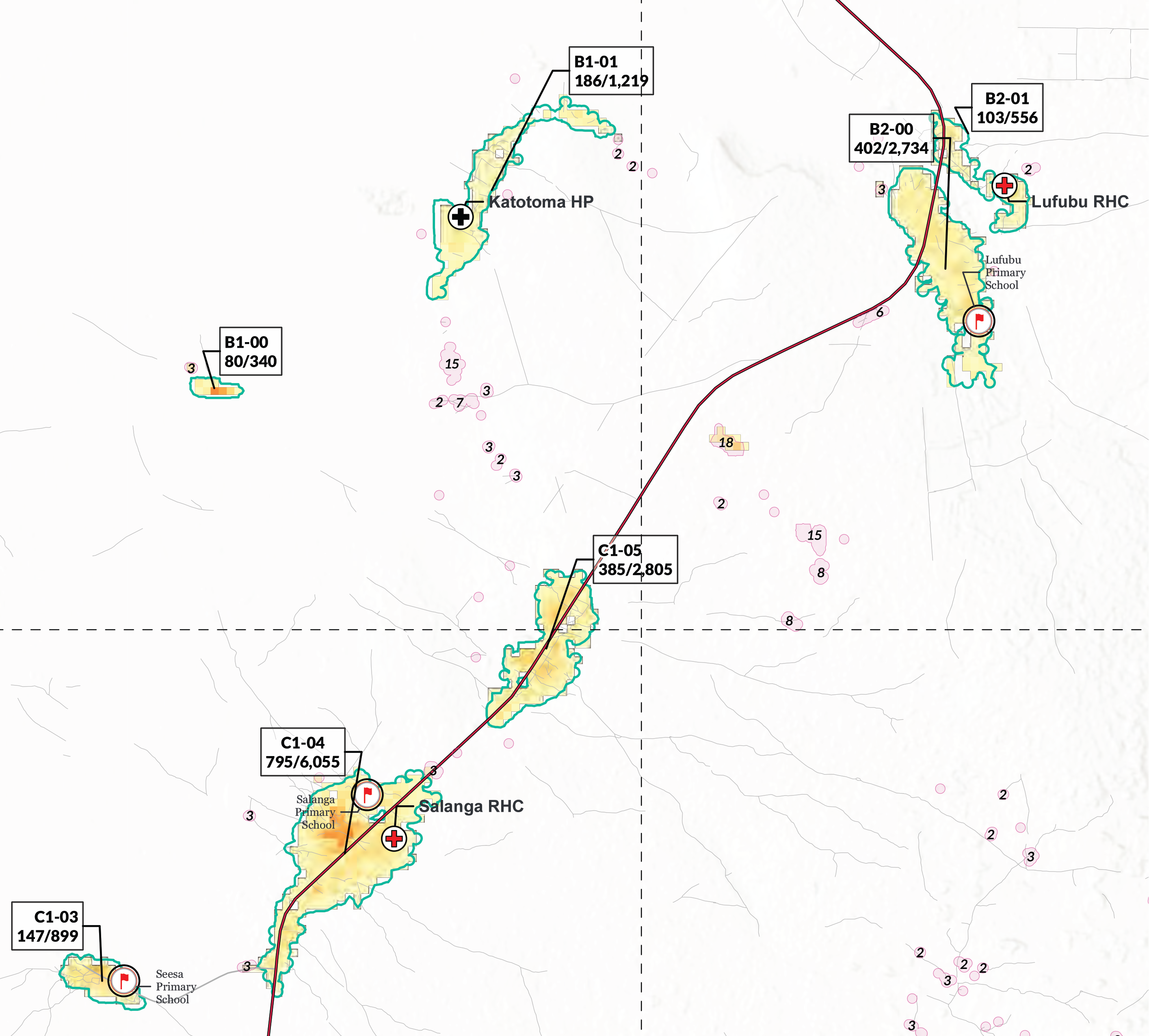 The provision of settlement locations, population data and estimated residential structure counts will enable a more strategic approach to resource allocation for ITN and IRS coverage. This strategic approach is particularly important in the context of COVID-19 where national health systems may shift resources to cope with the pandemic, leaving other areas with deficiencies. While much remains unknown about the effects of COVID-19, previous or current malaria infection could expose affected populations to more severe outcomes.

To ensure maps are finding their way into the hands of decision makers, Akros supported GRID3 Zambia and partners by developing a map template and training process around how to use them. These were then followed up with provincial microplanning training sessions for district stakeholders, funded by PATH, with the first pilots held in late June in Solwezi District, Copperbelt Province; Kasama District, Northern Province; and Mwansabombwe District, Luapula Province. Additionally, Akros presented at the GRID3 national-level Training of Trainers (TOT) in Lusaka and the provincial TOT in Kabwe. Akros’ support helped strengthen the capacity of national and provincial training teams to interpret and use the maps during microplanning.

In Gwembe District, Mike Mudenda, IRS manager for the region, commented on the process:

“To conduct planning using GRID3 maps was very helpful and gave us an opportunity to deal with real figures and structures on the ground. We were also able to visualise catchment areas and decide the best malaria control intervention in a particular area.”

“The strategy used for training for mapping is so efficient. It helped to identify areas and made planning easy. Knowledge about eligibility of areas for IRS will widen.”

After very positive feedback, plans to scale up the process for 116 districts across all 10 provinces in Zambia are currently being implemented.  The GRID3 Zambia team aims to support microplanning efforts by improving the availability of these maps, ensuring high intervention coverage as the country walks the last mile on the road to controlling malaria.

The GRID3 Mapping for Health project (GRID3 M4H) has reached a major milestone in its 19-month effort to support vaccination interventions in the Democratic Republic of the Congo (DRC).

GRID3 has begun supporting the WHO with the coordination and implementation of the Geo-located Health Facilities Database (GHFD) initiative in the Africa Region. Currently, the GFHD is supporting the production of needs assessments and work plans relating to countries’ health facility master lists.