Disease outbreaks often force governments to make extraordinary decisions to protect their populations. Chiefly, governments will implement measures to reduce population movements or otherwise prevent people from coming into close contact with each other; these measures can include in-country or international travel restrictions, bans on public or private gatherings, as well as closures of service sites such as schools and religious centres. Some of these measures were instituted in Guinea, Liberia, and Sierra Leone from 2014 to 2016 to fight the largest and most complex Ebola outbreak in history. As a result, the government of Sierra Leone closed all educational institutions, disrupting the educations of thousands of children. To continue educating students remotely, in a country where households have limited access to the internet and other technologies, the Ministry of Basic and Senior Secondary Education (MBSSE) developed the Education Radio Teaching Programme. This cost-effective initiative relied on experienced teachers recording lessons, adapted to local languages, that were broadcast across the country and allowed children to safely listen to their classes from home.

In March 2020, the ministry rolled out the same initiative in response to the spread of COVID-19. But the limited range of the nine radio transmitters (owned by MBSSE’s Education Radio) used to broadcast the lessons led to some regions having better access to the programme than others. To solve this problem, the MBSSE enlisted GRID3 to use geospatial data to inform strategic planning around improving coverage.

In collaboration with MBSSE, the GRID3 team at Flowminder carried out a three-phase analysis using Geographic Information System (GIS) techniques and its optimisation algorithm to determine how to achieve complete coverage. First, the team identified the coverage gaps of the nine Education Radio transmitters; then assessed broadcast power of other existing transmitters for expanding coverage; and finally used Flowminder’s optimisation algorithm to identify the location of possible new transmitters to be built.

In the resulting report, analysts estimated that 1.9 million (66 percent) of Sierra Leone’s school-age children (ages 3-17) lived within the signal range of one of the nine Education Radio transmitters, with border districts in the south and north of the country often being out of range.

For the second phase, the transmitters of 143 local radio stations were assessed and 14 of these “alternative transmitters” were identified as having high potential for boosting coverage. By combining the 14 alternative transmitters with ones being used in the programme, the government could increase estimated coverage to 91 percent. As part of the government’s initial response to COVID-19 school closures last year, some of these alternate radio stations were temporarily enlisted and paid to transmit the radio teaching programme in districts such as Pujehun and Kailahun. 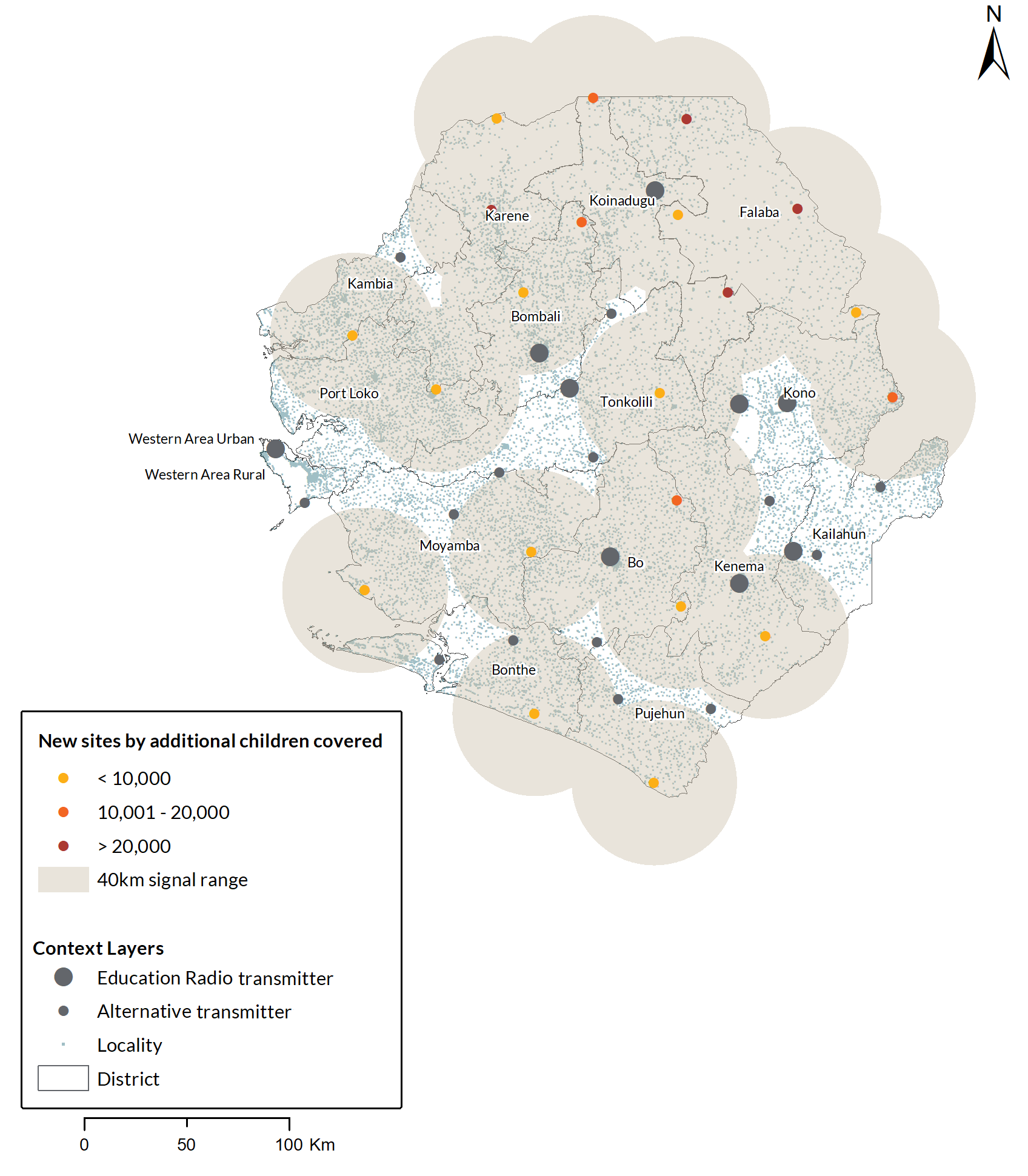 New transmitters and their buffers for 40km signal range, along with alternative and Education Radio transmitters (Scenario 1)

“Results from the optimisation scenarios have allowed us to identify the location for three new transmitters that would increase coverage of the Education Radio Teaching Programme to approximately 78 percent. MBSSE has already secured money for these additional transmitters, so this work is very timely,”

concludes David Sengeh, Minister Of Basic and Senior Secondary Education and Chief Innovation Officer for the government of Sierra Leone.

This strategic placement of new transmitters marks a strong beginning for attaining better coverage. The full report including recommended next steps is available here.

The GRID3 Mapping for Health project (GRID3 M4H) has reached a major milestone in its 19-month effort to support vaccination interventions in the Democratic Republic of the Congo (DRC).

GRID3 has begun supporting the WHO with the coordination and implementation of the Geo-located Health Facilities Database (GHFD) initiative in the Africa Region. Currently, the GFHD is supporting the production of needs assessments and work plans relating to countries’ health facility master lists.